After drawing a cow elk tag for a late rifle hunt one December for
Colorado’s GMU 80, I took my daughter out for opening weekend,
and then I returned on the cusp of a huge snow storm. As the gray
clouds gathered over the peaks to the south, my brother drove me
to the aspen benches at 10,000 feet. Once the truck ran out of
traction on the rocky trail, I got out and slipped 6 cartridges into
the tubular magazine and chambered one. It began to snow heavilybig
wet flakes drifting down, making the woods dead quiet.
Working my way across the timbered slope, I then turned down
into the cedar ridges below. Soon after, I spotted two cow elk
feeding together and snuck to within 150 yards where I bellied into
the snow and laid the rifle over my daypack, carefully aligning the
sights on the nearest elk’s shoulder… 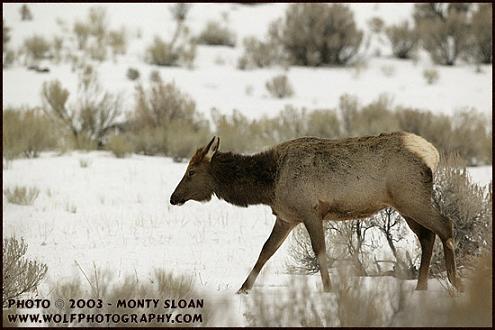 My rifle that day was a Winchester Model 94 Big Bore chambered to
the .375 Winchester cartridge. The 20” barrel makes for a handy
rifle in the thickets. The light weight makes a sling unnecessary,
although it wears a Remington factory original carry strap for better
shooting. The peep (aperture) sight helps with accuracy, and the
large diameter bullet opens a large wound channel. A Pachmayr
Decelerator recoil pad arrests the thump of my customized 278
grain loads, and gives me room to crawl the stock with my long
neck. It had never drawn blood in my hands previous to this. 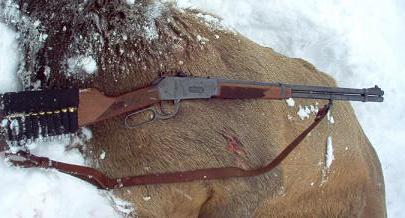 I had spent the previous summer working up a load that would
produce decent groups and velocities. After trying numerous
jacketed bullets in various weights, I decided that this rifle was a
good candidate for some cast bullet loads. If you are familiar with
this process, you know that velocities must be limited in order to
prevent “leading” or the transfer of lead from the bullet into the
rifling grooves in your barrel. It just so happens that the .375
Winchester’s top speed doesn’t pose a problem in that the case
volume means velocities are limited to 2200 feet per second (fps)
or so. I ended up with a custom Lee bullet mould that would pour a
bullet weighing 255 grains without the gas check. After more
experimentation, I settled on using W-W cases, a Remington 9
1/2M primer, 37.0gr of AA1680 powder, and the Lee Flat Point Gas
Check moving out at 2180 fps. My tightest group at 100 yards
measured 1.55 inches, amazing work for a lever action rifle and
open sights. This load may be too hot in your rifle, so please be
careful when working up loads, watch closely for primer flow, tight
extraction, and shortened case life. Winchester lever action rifles
are strong and safe, but they are not as sturdy as bolt action rifles,
so pressures can quickly get out of hand. 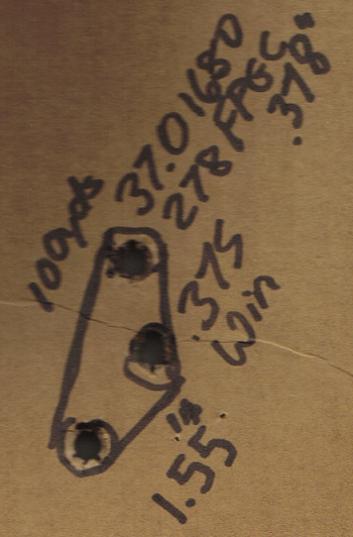 I bellied down in the snow behind my daypack, and after a short
burst of the Primos Hoochie Mama cow elk call, the cream colored
wapiti drew to a stop. I settled the front sight bead on her front
shoulder and began to squeeze the trigger- at my shot, she
immediately fled downhill as though she was heart shot. I walked
over to follow up on my shot, finding some hair that had been cut
and began to follow her tracks. It was snowing so heavily by now
that I couldn’t see any blood in the snow and I didn’t see blood
until she crossed a 4 wheel drive trail. Looking back on the chain of
events, elk hair soaks up alot of blood, and it probably took some
time to trickle down the foreleg onto the ground. I could see where
she stopped and looked back several times, and then she jumped
from underneath a pinyon tree. She ran like a jackrabbit, making me
believe she wasn’t hit very hard. I followed her over a ridge, and
came across her bed with a 6″ circle of blood centered in the outline
of her shoulder. At this point, I spotted her moving along the
opposite ridge and was able to finish her with an offhand shot
through the neck at 150 yards or so. 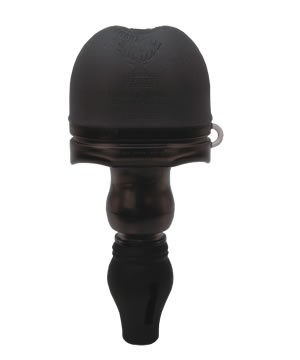 While skinning the elk, we found that the first bullet never
penetrated the ribcage. It broke the near shoulder and traveled
down the ribcage and lodged itself in the brisket. Very interesting
bullet path, and I am rather disappointed at the lack of penetration.
On the other hand, this bullet broke the shoulder knuckle of a tough
animal at 150 yards, and was deflected. Upon skinning, we found
the bullet from her neck, measuring .473″ at its greatest diameter,
weighing in at 188.5gr.

The bullet recovered retained 74% of its original weight. Brinell
hardness, measured on my LBT tool, came out at 11. The “highly
technical chemical compound” of my bullet mix is automotive wheel
weights of all makes, water quenched as they drop from the mould.
This bullet lost nearly 100 grains of its original 278, and so this
points to possibly casting a harder bullet in the future. I sized the
bullets to .378″ in an RCBS lube/ sizer. Why would I size the bullet
to .378″ in a .375 caliber rifle? We will answer that in another
installment on bullet casting. I participated in a Group Buy for a 6
hole Lee mould that some members of Cast Boolits put together. Its
a great forum, lots of good guys who are interested in shooting-check it out sometime.

After I got the mould, I spent some time
working up a load, reaming out my Hornady dies so I could seat
those big slugs, etc. As a side note, my daughter had previously
been teasing me with “that little lever can’t kill an elk, you need to
take Greenie” (my .358 Norma Magnum). She shoots a Ruger
stainless rifle chambered to .280 Remington. I have a .280 myself
and have tons of confidence in the round. This story and experience
has sure toned her rhetoric down! So…is the .375 Winchester an elk
rifle? I think so, even though that first bullet never penetrated the
vitals. Next time I will try to stay away from heavy shoulder bones.
In summary, the Winchester 94 Big Bore is a fun rifle to carry,
shoot, and load for. An elk hunter is well armed with one of those
little carbines, and despite this limited experience, has plenty of
power for the job. Its not a plains rifle, nor is it ideal for those 400
yard cross- canyon shots. This gun, however, is certainly the ticket
for darkened, north facing slopes where the elk and deer lay down
for their mid- day naps. If, like myself, you enjoy sneaking through
the dark timber at lunch time, a powerful lever action rifle will
satisfy your needs.

I will probably end up with a sister rifle chambered to .356
Winchester like the one shown above…just because!