It was snowing heavily as the blaze orange clad hunter climbed the aspen
covered ridge. In his hands he cradled a peep sighted, short barreled ’98
Mauser. As he neared the ridgeline, a small mule deer buck sprang from
his snowy bed. The man watched the forkhorn bounce away, then
resumed his search for elk.

This scene happened during a recent elk season to me. The rifle
in my possession that day was an old Type B Mauser Sporting Rifle. It was
chambered not for the 8x57mm Mauser, but to a different round; the
9.3x64mm Brenneke. I did finally harvest an elk that season, but not
with this rifle.

For those of you familiar with the ballistics of this 9.3mm round, you might say
that I was over-gunned for elk. On the other hand, anyone who has
watched one of these tough animals soak up lead might be inclined to
agree with my choice. The 9.3×64 is a heavy hitter with a fair spread in
bullet weights available to the handloader. I might add here that you should
be a handloader, or else have a thick wallet should you want to shoot your 9.3×64
very often. With a box of RWS ammo over $100 per 20, rolling your own begins
to look very attractive.

Brass was available from Huntington and Old Western Scrounger at last
check. I’ve purchased enough Horneber brass from Huntingtons to keep me
supplied for a while. RWS components might now be available from a
Norma distributor. In a stroke of genius (or idiocy) fueled by a tight
budget, I once hit upon the idea of converting .375 H&H Magnum brass. I had
a local machine shop turn the belts off a box of Holland & Holland cases.
This operation trimmed some material off the rim as well. It did turn out
to be workable brass, and I used it for practice loads for several years.
Case capacity was 2 grains of water greater than the RWS offering.
My loading program used a variety of products from both overseas and
the U.S.

Loads worked up with various bullet weights appear in Table 1, below:

Once you get tapped into the market, there are a surprising
number of sources for 9.3mm or .366” components. Lyman, Redding, and
RCBS all make dies in 9.3x64mm. I can save you some searching by telling
you that a #11 shell holder is used in your Lee Auto-Prime and a #18
RCBS shellholder does the job for sizing and bullet seating chores on your
press.

The pamphlet found in the box of 285 gr. RWS solids shows them
obtaining 2690 feet per second (fps) out of a 26” barrel. My little cannon
spits them out at 2587 fps, showing that you don’t necessarily emasculate
this cartridge when you lop off some barrel steel. In contrast, overbore
shells like the .264 Winchester Magnum do suffer when you use less rifled
tube.

This rifle, at 7 ½ lbs. is a handful on the bench…actually, it just plain
kicks, and HARD! The forearm jumps off the bags and rolls at the same
time, and this with a firm grip on the fore end. Next, the thin walled
barrel heats up rapidly, making 5 shot groups (and thus, a good analysis of accuracy) difficult. I did achieve some tiny Average Deviations and Standard Deviation readings, which would tend to indicate a more accurate load. Incidentally, maximum pressure is listed by RWS at 54,100 psi. I don’t have pressure testing equipment on hand, but I tend to keep loads throttled back a bit in deference to the old rifle.

As far as comparing this cartridge to new developments, we have the
.376 Steyr and .375 Ruger. After looking at the ballistics of both rounds,
it can be seen that the .375 Ruger is almost identical to the 9.3×64 in
power. It has the advantage of using the more common .375″ bullets, and
being a commercially available, U.S. manufactured round. The .376 Steyr is another powerful number which does not require a .375 H&H length action. I decided on the Brenneke round to stay in tune with the rifle’s Teutonic roots and styling. 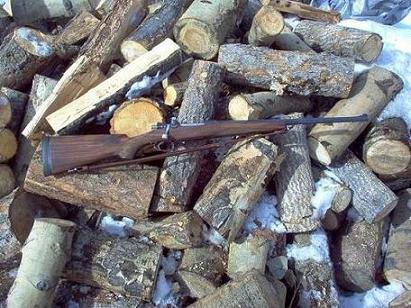 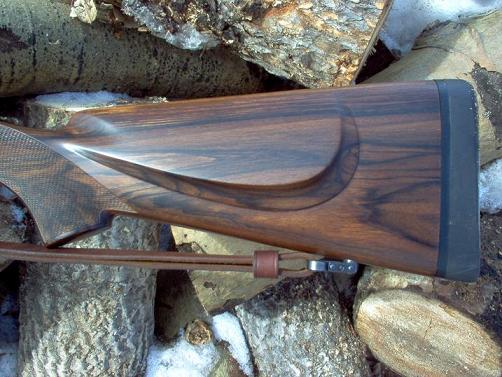 Some notes pertaining to my rifle; it appears to be one of many military
actions converted to sporting use by J.P. Sauer and Son of Stuhl,
Germany between the wars. It utilizes a removable (not hinged)
floorplate, accessed by turning the thumb lever 90°. The gun came
equipped with double-set triggers, but now sports a Timney Sportsman
adjusted to 3 lbs. of pull. The rifle was rebored and rifled by Cliff
LaBounty back in 1995. Jim DuBell now runs the LaBounty shop under
Delta Gun Shop. The rest of the work was performed by Jim Botsford,
then of Del Norte, CO and now with Quail Run Sports. I believe
Jim is putting his talents to use fitting shotgun stocks so that people can
create dust with Sporting Clays targets. Jim was exceedingly patient with
my changing specifications and constant “checking in”. His work is
top-notch and a bargain at any price. The stock is an example of this,
being made of semi- fancy English walnut, has flawless checkering, and is
a classic beauty.

With the slim, short barrel, Redfield peep sight, and a slender stock, this
rifle is a joy to carry in the woods. While the recoil is vigorous, it’s not
impossible to handle offhand. One of these days, I might calculate the
back thrust in foot-pounds, but until then, I think I prefer to exist in
blissful ignorance!

Though I have yet to slay any big game with this gun, my grandfather used
it to end the career of more than a few deer and elk. Back then, it
was chambered to 8x57J, and no doubt Gramps used “S” bore cartridges
in it- proving why the factories download the 8mm Mauser. “J” bore rifles
used a .318” bullet, while the “S” bore guns shot the more common and
modern .323” slug. As you might imagine, forcing a 5 thousandths
oversize bullet down the barrel raises pressures abruptly and doesn’t do
any favors for accuracy.

For a bit of history, the rifle was given to my Gramps by an American
Indian friend named Charlie. My father reports that it had a dark
stock with brass tacks adorning it. It sat in my father’s closet for years
before I grabbed it and began the restoration process. The old veteran
had been devoid of a stock by then, and the chamber was “ringed” near
the shoulder with pitting. Someone probably left a shell chambered and
the moisture settled in at that spot.