Sarah had hunted hard for two seasons, experiencing many “almost” chances at a legal elk. She was in her 17th year, and the previous hunts had yielded only frustration; lost walkie- talkies, long fruitless walks, and one encounter that came on a timbered ridge with a cow elk whose mind was elsewhere. But now, Sarah’s first elk was on the ground, and Sarah was grinning from ear to ear. 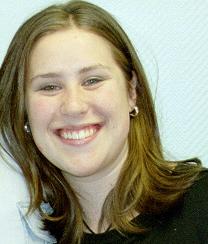 Our heroine had to overcome numerous roadblocks in her quest for an elk. She is left handed, and so none of the rifles in the family collection would truly suffice for her. Dad’s heavy Model 71 Winchester lever action would have worked, but with the hammer functioning as the only safety, Sarah was not comfortable with the rifle. In addition, the lack of a scope sight made things more difficult. It is generally known that new shooters will do better with a scope than trying to focus on 3 items (rear sight, front sight and target) simultaneously, as with open sights. So, when Dad camehome with a pump action rifle, Sarah fell in love with the idea of not having to work a bolt by reaching over the action and her line of sight. 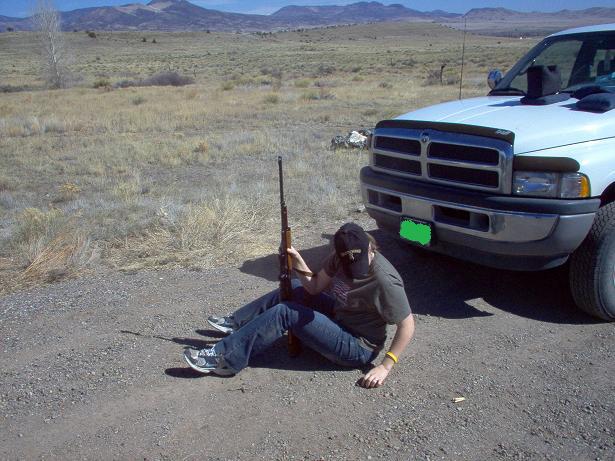 This young lady then poured heart and soul into overcoming the recoil of her 30-06 chambered Remington Model 760. She practiced by dry- firing endlessly at an elk portrait in her bedroom. She worked hard on the range, finding the best field position for accurate shooting, which turned out to be sitting. She learned about elk and deer behavior, asking questions and reading on her own. Her participation in field dressing, skinning, and butchering other game animals had helped her study of anatomy. Sarah was as ready as a kid could be, but no elk stumbled into her sights. One thing you
had to say- no one was more dedicated or stubborn about harvesting an elk. Perseverance normally pays dividends, and Sarah eventually “earned her wings“.

It was a late December hunt, and we were in Colorado’s southern mountains, looking in the cedars and sage for elk forced lower by the snow and cold temperatures present in the high country. Our morning hunts had been limited to glassing ridges and limited ambushes as temperatures hovered near -15°F each day at dawn. As we crawled along a USFS road in 4wd Lo, we passed a promising looking draw on the way into a box canyon, then parked at the mouth of this draw. Two of Sarah’s sibling’s chose to stay behind and enjoy that teenaged icon- the CD player. We saddled up (which means donning day packs and rifles in foot hunters lingo) and started up the draw with the sun
threatening to crawl over the ridge behind us. 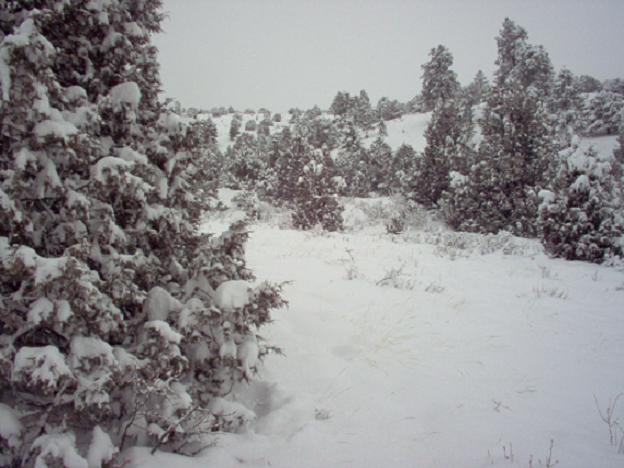 Just as the truck disappeared from sight behind us, the hillside literally came alive with elk, or so it seemed. There was a particularly large cow whose coloration and stature made us search hard for antlers- even though none of us had a bull tag. Sarah’s younger sister, Shelley, got a crack at this large cow and missed. At that point, we spotted numerous elk that were closer, and Sarah engaged her elk. Shelley made a sharp right and went to follow up on her missed shot. As often happens with elk, as soon as the shooting begins, there is some hesitation as to which direction they should take,
especially if the lead cow hasn’t spotted or winded a hunter. After a bit, the old girl led her herd out of the top of that draw and over the ridge to safety. As soon as the excitement died down, we noticed an elk standing in the bottom of the draw, not having departed with the rest of the herd. As we approached her, she bedded down, and Sarah finished her with a nicely placed neck shot. A post mortem verified that Sarah had struck a disabling blow to the elk’s hip and pelvis, which is why she was immobilized but still alive when we spotted her. 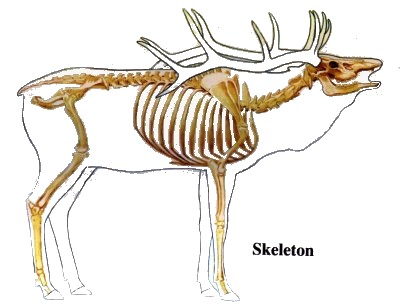 Of course, now the work begins, and Sarah did an admirable job of field dressing her trophy, with some help (interference) from Dad. Soon after that, the ATV was brought up, and Sarah’s elk was transported downhill to the pickup. 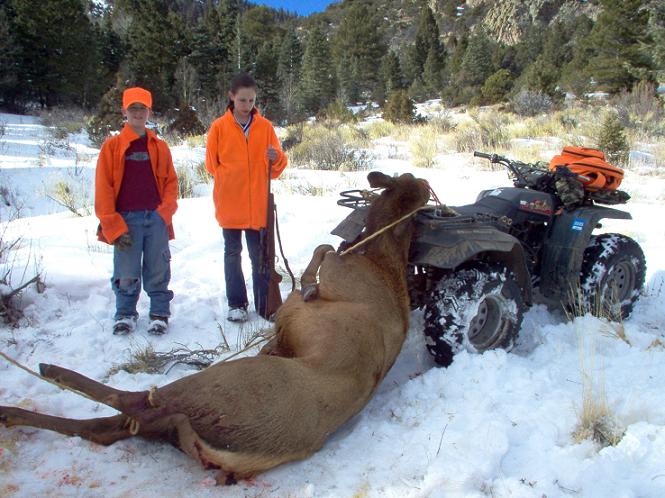 A funny side story is that following the field dressing, Sarah’s sister Kelsey was asked to roll the gut pile off into a small gully. When she got the mess moving, the esophagus let out a belch and the steaming mass began rolling quickly towards her, giving the impression that she was being chased by a rolling elk stomach as it burped up grass! This was one of those scenes that gets played over and over again in hunting camp and around family rooms for years afterward. It is also fun times like this that make up the camaraderie that comes from hunting with your kids. Seeing Kelsey being chased by an elk stomach was hilarious. 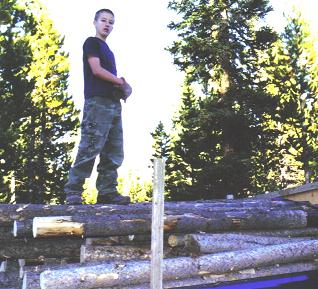 If we can digress for a moment, lets discuss the idea of outdoor recreation with your kids: A person could use this line of reasoning as a great excuse when discussing some of the reasons for hunting.
On the other hand, an anti-hunter might dismiss this as something to be to scoffed at as rednecked fun. So be it. My youthful memories are full of hunting related experiences shared with my father. I wouldn’t want it any other way. And I wanted the same closeness with my children. This doesn’t mean that kids who are never exposed to hunting are doomed. Not at all. But for those moms and dads out there (and potential moms and dads) who do get the chance to enjoy the outdoors, do it with your children. There are only positives to be gained. There is a saying that goes something like
this; “Hunt with your kids, not for them”. Yes, it takes some work, some planning, some preparation to take your kids hunting. But it is worth it. My children are strong, happy, healthy adults today due in part to outdoor experiences. Fishing, camping, hiking, photography, ghost town exploration, berry picking, cycling, horseback riding, even ball games played in the street are all good pursuits to get. 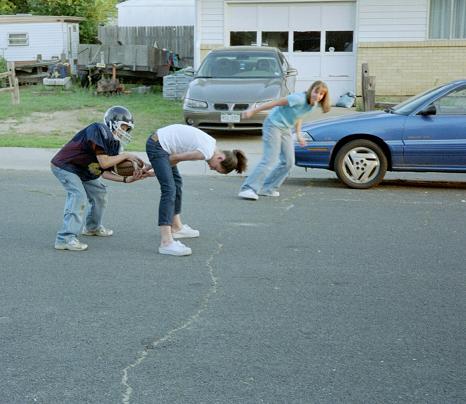 This story ended with an encouraged young lady who has to this day called herself “Dad’s hunting buddy” and who continues to be excited about the upcoming hunting seasons. Sarah’s elk met the family’s meat needs for 9 months, and there were many undocumented, and maybe un-noticed lessons that we all took with us from that cold day in December, 2004. 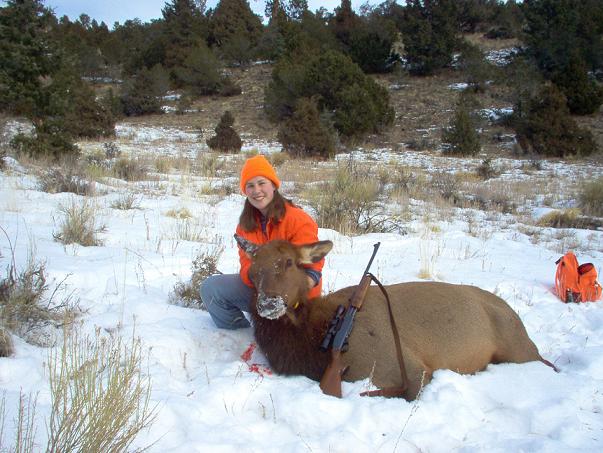